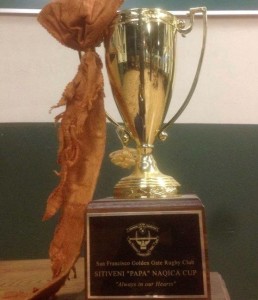 Both teams played for the Papa Naqia Cup.

The Denver Barbarians got their season underway in San Francisco after having a bye in the first week of the season and they nearly started it by knocking off the defending champions. However, a strong team effort from SFGG, particularly in the second half, saw them emerge with a narrow 22-20 come from behind victory.

In a match that featured both teams slugging it out in wet conditions it took awhile for someone to score but it was Denver that was rewarded first when wing Elliott Dillon-Herzog scored just before the 20 minute mark. Fullback Max De Achaval would make the conversion and the Barbarians would led 7-0.

Less than 10 minutes later SFGG were able to tie the score as flanker Opeti Okusi crossed over and Volney Rouse converted. Still, it was the Barbarians that would be on the front foot in the half with De Achaval notching a penalty with nine minutes remaining in the half and then at the stroke of halftime to give the Barbarians a 13-7 advantage at the break.

The second half saw SFGG regroup and seven minutes in Seamus Kelly would score on his starting debut for the club. Rouse would miss the conversion but would pick a penalty to give SFGG their first lead of the match.

Dillon-Herzog would add his second try of the day and De Achaval his third conversion to restore the lead to Denver at 20-15 but a try from Bubba Jones with less than ten minutes remaining and the conversion by Rouse would seal the win for Golden Gate.

As SFGG head coach Mark Giacheri noted after the match he was happy with the result but not the way his team played. Despite the loss Denver have to be happy with the effort they put out on the pitch, especially in difficult conditions on the road in their first match of the season.

Up next for SFGG is a rematch of last year’s final as Glendale visit Treasure Island. Denver will head to L.A. to face Santa Monica.