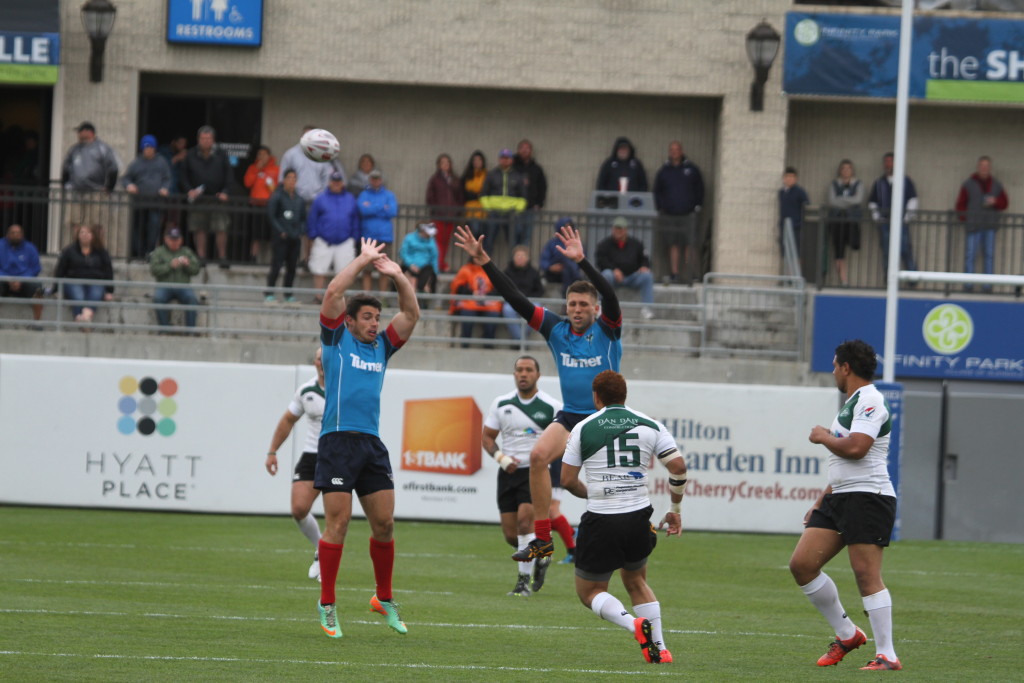 The Glendale Raptors are the 2015 Pacific Rugby Premiership champions! In a hard fought match in chilly conditions at Infinity Park the Raptors got two tries a piece from co-MVP’s Max Statler and Preston Bryant to beat SFGG 25-11. The win caps off a terrific season for not only Glendale but the Pacific Rugby Premiership as the competition produced it’s more thrilling season to date.

With the vocal home crowd behind them the Raptors wasted little time getting on the board. Pinning SFGG deep in their own end the Raptors pushed for the line with their maul before sending the ball out to their backs. After working between a few players the ball found it’s way into the hands of Statler who made a move under the defense for the try. Armandt Peens hit the conversion and Glendale led 7-0 just minutes in.

If SFGG had one advantage on the day it was in their scrum. Time and time again the SFGG forwards rolled the Raptors back. Unfortunately for them it didn’t lead to points as each time they looked to have an advantage Glendale were able to clear.

The Raptors had the bulk of the possession early and they continually looked to play it out wide to their wings. Unfortunately for them they continued to come up short and it was Glendale that would have the next opportunity at points when SFGG were penalized at the breakdown. However, Peens’s penalty went wide of the mark.

While Peens had a so-so day from the tee Volney Rouse mostly made the best of his opportunities. His first chance came just after the 20th minute mark when SFGG had their first real spell of possession in Glendale’s end. The Raptors were guilty of a penalty and Rouse stepped up to make it 7-3. He made it 7-6 just a few minutes after another spell in the Glendale end.

The Raptors had a chance to extend their lead five minutes before the half when they stole the ball deep in SFGG territory. After the steal they quickly worked the ball out wide where Bryant was waiting on the wing to increase the lead to 12-6. Rouse had another attempt at the posts before the half but it was off.

Knowing they needed something to jumpstart themselves in the second half SFGG came out firing. A knock-on by Nick Wallace gave SFGG the space they needed. A few quick passes and Samisoni Pone stretched over for the try and a 12-11 score line with just a minute gone. A Peens penalty attempt a few minutes later when wide but he had another bite at the cherry a few minutes later from 45 meters out and converted.

As much as Glendale wanted to get the ball to their backs, SFGG wanted to use their forwards. They finally were able to use them to a bigger extent around the 55th minute mark when they had a long spell of pressure near the line. However, when they finally elected to send it out to their backs the pass wasn’t solid and Glendale were able to clear.

That turned out to be a defining moment in the match as nearly 10 minutes later Glendale used a well worked lineout to spread the ball across the pitch to Dustin Croy who made the break and then offload to Statler for his second of the match. The conversion missed but Glendale led 20-11.

They then put the final touches on the score line a couple of minutes later. Substitute Hanco Germishuys, who has been very solid for Glendale since joining in the middle of the season, made a big run down the sideline. He was caught but the ball found it’s way into the hands of prop Josh Sutcliffe who flung a looping pass out to Bryant for the try.

SFGG attempted to push down the pitch for the remaining ten minutes but time and time again they came up short. Their best chance came when they earned a penalty deep in Glendale territory but instead of taking the quick tap they used a scrum and when the ball was released Tai Enosa was tackled in isolation. They had another advantage when Chad London was shown a yellow card for delaying play five minutes from time but Glendale were able to ride the time out for the win.