This is it! An exciting and tense year in the Pacific Rugby Premiership comes to a close this weekend as the Glendale Raptors and San Francisco Golden Gate square off for the second year in a row in the grand final. In five meetings between the two clubs in the two years the teams have split the regular season meetings at two a piece but it’s SFGG that holds the advantage thanks to a win in last year’s dramatic final. They will have to go on the road once again to Infinity Park to try and repeat last year’s win.

Both Glendale and SFGG enter the final after a string of good results. The Raptors beat rivals Denver in a close match before beating Olympic Club on the final week of the season. SFGG faced more pressure than Glendale did at the end of the season and after a set back against OMBAC in week eleven rattled off big wins over Santa Monica and Belmont Shore. In their two head to head meetings this year Glendale snuck out a 31-27 win at Treasure Island back in week three and SFGG did the same at Infinity Park 23-21 in week nine.

There are individual battles throughout each of the rosters but much of the focus will center on the halfbacks, in particular Glendale’s Mose Timoteo. Last year he was the captain of SFGG and had been at the heart of the club for a number of years. After relocating to Denver for personal reasons he joined the Raptors and has been one of their most solid players this season. SFGG have had a bit of a rotation at scrumhalf this year but have settled on Brent Hamlin the last couple of weeks and he’s done a good job getting SFGG out attacking.

The backs are another strength for each team. There was the potential of an Eagle on Eagle match-up in the centers with Chad London lining up for the Raptors and Seamus Kelly for SFGG but Kelly will be on the bench for SFGG. Still, the match-up between Armandt Peens and London against Mile Pulu and Samisoni Pone is one to watch. Pila Huihui scored a league leading number tries this year and will certainly be a focus for the Glendale defense.

In the forwards both teams are solid as well. Nick Wallace and Zach Fenoglio are as experienced as the come and will be joined by Jake Turnbull to make the Glendale front-row. Joe Sililoto and Patrick Latu have been solid props for SFGG with Neill Barrett at hooker. The strengths of the forwards for both teams are arguably in the locks. Brendan Daly has put together another fantastic year for SFGG while Christian Wiessing may be young but has played big minutes for Glendale.

In terms of statistics, Golden Gate might have a slight advantage. They have been the league’s best defensive and offensive team this year. Defensively, they have given up only 205 points, 84 better than second place Glendale. Offensively, they scored 495 points, 58 better than number two Glendale. SFGG also scored 70 tries to Glendale’s 64 while only giving up 27 to Glendale’s 40.

Glendale will have the advantage of playing at home. That means they don’t have to deal with travel, they can have their friends and family cheering them on, and are well familiar with the building. After two years and five matches at Infinity Park SFGG should be familiar with the venue but travel can take a lot out of a team.

No matter who wins on Saturday it will be a banner year for the PRP. The race for the playoffs came down to the final week of the season. From top to bottom teams were competitive and matches featured attractive, attacking rugby. So if you don’t have your tickets make sure you head on out to Infinity Park on Saturday! 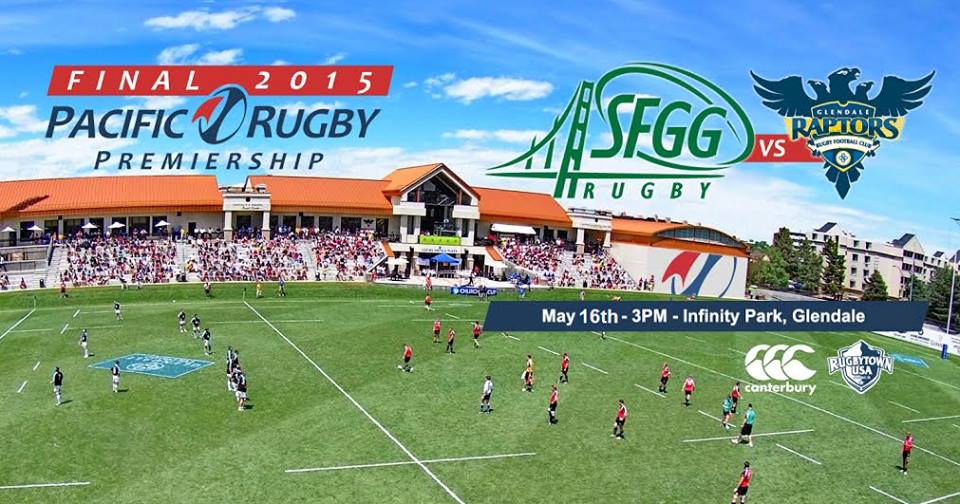