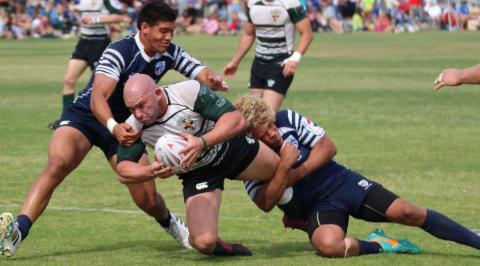 Santa Monica and OMBAC are known for their point scoring and they showed plenty of that early. Pangelinan got things started early with a penalty in the third minute but that was quickly followed up with a try from Charles Purdon only a minute later. Bennett converted to give Santa Monica a 7-3 lead. Only four minutes later Pangelinan would score the first of his tries to give OMBAC an 8-7 lead.

That lead would then move to 13-7 when Martin Knoetze crossed over for a try. Despite his scoring prowess on the day Pangelinan did miss several opportunities to pick up additional points as he did not complete one conversion. The match went into the half at 13-10 when Bennett hit his first penalty of the day.

A penalty just on the other side of the half from Bennett tied the score a 13-13 but that was as close as the Dolphins would get. A penalty from Pangelinan and then a try from Orin Catrett put OMBAC in front 21-13. Harry Bennett would kick another penalty but Pangelinan would cancel that out with a penalty of his own and a try to make it 29-16. Santa Monica would stake a furious comeback in the last ten minutes with a try, conversion, and penalty from Bennett only four minutes apart only to come up just short.