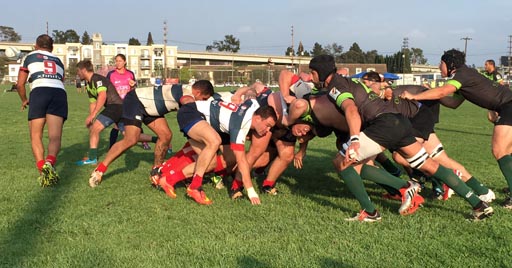 In a match-up between last year’s regular season champions and this year’s upstarts it was the champions that came out ahead as Glendale beat Santa Monica 46-26 in Los Angeles. With the loss Santa Monica moves off the top of the table but stays second by securing a bonus point. Glendale are right there at 2-1 and 10 points with a game in hand on leaders SFGG.

Glendale had the first opportunity to score within the first five minutes by Armandt Peens would miss the penalty. Instead, it was the Dolphins that would take advantage of their opportunities as scrumhalf Charlie Purdon scored from a quick tap penalty on the five meter line to give Santa Monica a 5-0 lead. That lead would hold up for about ten minutes before Glendale hooker Zach Fenolgio would score in similar fashion. Once fly-half Daniel Flemming hit the conversion Glendale would lead 7-5 after 20 minutes.

After giving up the try Santa Monica rallied and only two minutes later scored their second try of the match when Ali Ross touched down. Mathieu Lesgourgues would step up and make the conversion to put Santa Monica up 12-7. As was the nature of the back and forth first half Glendale would respond quickly with a pass from Cody Melphy setting up Peens for the score. Santa Monica would then retake the lead through a Chris Baumann try and Lesgourgues conversion. Glendale would try to equalize with a try from Chad London at the stroke of halftime but the conversion missed giving Santa Monica a 19-17 lead at the break.

Not wanting to give up a second loss of the season Glendale responded with a big second half. Five minutes in Melphy would score to put the Raptors up 22-19. Mose Timoteo would add to the total just before the 50th minute mark when Melphy did the hard work on a 60 meter break and fed Timoteo for the try. When Flemming made the conversion the Raptors led 31-19. Santa Monica would score a final try though flanker Philip Osborne but the day would belong to Glendale. The Raptors added tries from London, on a blocked and recovered grubber kick, and Austin Welch, as well as a penalty from Flemming to finish the scoring.