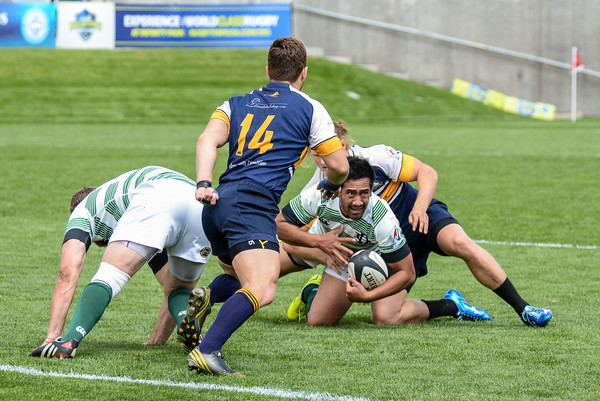 Belmont Shore have kept their playoff hopes alive thanks to a 32-13 win over the Denver Barbarians on Saturday at Infinity Park. After last week’s loss to OMBAC Belmont couldn’t afford to make any mistakes against the Barbarians and and responded with one of their best efforts of the year. With the defeat the Barbarians have effectively fallen out of the playoff chase.

Andy Jackson put Belmont Shore up early with a penalty just two minutes into the match. His effort was matched by Max De Achaval around the ten minute mark to level the score at 3-3. Both teams have plenty of the ball early on and found opportunities to score. However, with nearly a half an hour passed Belmont only held a 6-3 lead after another Jackson penalty.

The first try of the match came off an amazing effort from Mikey Te’o. After athletically grabbing the pass out on the wing Te’o went past Denver wing Elliot Dillon-Herzog and then evaded De Achaval to go under the posts. Jackson would convert agh Belmont would take a 13-3 lead. Both teams continued to play entertaining, helter skelter rugby the rest of the half but neither could grab another score before the break.

The first twenty minutes of the second half belonged to the Barbarians as they would go on to level the score. Off an attacking lineout Denver quickly worked the ball to the middle of the field where a cutting passing from Ata Malifa found the streaking De Achaval for the Barbarians first try of the match. De Achaval would hit the conversion and a penalty a few minutes later to make it 13-13.

However, knowing they needed a win to stay alive in the playoff chase Belmont Shore put on a great performance the rest of the match. Only a couple of minutes after De Achaval’s penalty strong work at the ruck from Belmont saw Richard Deadmann flop over for the score. Te’o then added his second a few minutes later with a burst out to the corner before a nice offload from Peter Sio found Jack Tracy for Belmont’s third and final try of the half.