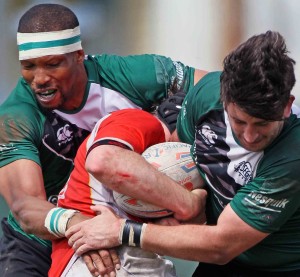 Rivalries can be tricky things. Even when teams aren’t close in the standings they can be close on the field. However, that was not the case at Treasure Island on Saturday as SFGG beat rivals Olympic Club 83-3.

Leading the way for SFGG was Pila Huihui who opened and closed the scoring on his way to five total tries. It’s the second time this season that the winger has put in a big multiple try performance against Olympic Club. In two matches against the rivals he’s scored 11 tries. Other players with multiple tries on the day include Opeti Okusi and Mile Pulu. Peter Moala, Patrick Latu, Ricky Reynolds, and Don Pati also had tries. Keegan Engelbrecht had a penalty for Olympic Club.

The win keeps SFGG in a playoff spot in second place. They will play Glendale in a huge match next week that could determine who finishes in first place at the end of the season. Olympic Club still remain winless on the season and will face OMBAC next week.