Welcome to the ‘Samurai Sportswear Coach’s Corner’. This will be a weekly post where we check in with the PRP team coaches for feedback, insight and comments from the previous weekends games and the fixtures for the next weekend.

The week that was…..

First and foremost it was super exciting to finally kick the season off back into the return of the Pacific Rugby Premiership. It was a great opening weekend with all the teams together at Ray Sheeran Field with fantastic weather and a good atmosphere created by a large sized crowd.

Onto the match, we knew leading into the game with Belmont that it would be a huge challenge, our previous two matches have been decided in the last few minutes and by only two points so we had no illusions about the task that lay ahead of us. I expected that there would be some rust in our performance not having played any pre season games. We have tried to create intensity in our training but their is not substitute for the real thing. The match itself was made exciting by the fact of the closeness and several lead changes throughout the game and the fact going down to the wire, decided by the last play of the game. I thought our set piece was pretty dominant but Belmont’s ability to hold the ball for long periods of play with multiple phases was also crucial to the end result. Both teams had momentum at stages and it was really good to be a part of a match that could have gone either way. I thought in the second half when we adjusted our handling skills under pressure we were able to have good periods of play and apply pressure. In the end the difference for me was the passion and line speed on defense Belmont had throughout the match.

We took alot of positives out of the match, a few of our younger guys new to this level really put their hands up and their enthusiasm was pleasing to see, we will be much better for having the match under our belt moving forward and I’m sure we wont have as many handling errors in 40 minutes for the rest of the year! To lose to an extremely talented and committed Belmont Team already a few matches into the season in the last play of the game was tough but we took a good amount of learning out of the defeat.

Leading to Santa Monica we will be again giving young guys chances to step up and see what they are capable of. We would like to wish Brendan Daly all the best for the USA eagles in the coming weeks, we had not intended on giving him game time last week but our captain turned up late so we replaced him with Brendan.

We were very impressed with how well run the first round of the PRP was and the level of competition that was on full display by all the teams.

Our first up game against a well drilled and well-organized Life West did not go the way we wanted but our players played really well and stuck to their guns to fight all the way throughout the full 80-minutes and were rewarded with a late try by our scrum half Victor Woo. We know we need to get better to have a chance to finish in the final rounds, and the team is excited to meet that challenge.

Talapusi had a standout game for Life and is definitely a player to watch as the season moves on, he’s someone we will need to contain better next time around if to have a chance to beat Life. All up we’re very happy to be back in the PRP and are now looking to next weekend’s game against SFGG in search of our first competition win.

The first round results showed that this will be a competitive league. Despite the scoreline we always felt Santa Monica were in the game. We gave up possession too easily and at times without pressure being applied to us so we need to address that quickly in this league or we will be punished by teams who can exploit the turnover. I was impressed by Santa Monica’s clinical execution at lineout time but I guess when you have coach with Scott Murray’s experience that would be expected.

OMBAC showed us how strong they will be this season so looking ahead to this weekend, we will have to be on point defensively if we are to make a game of it. Their ability to control possession makes them a formidable outfit. It is always enjoyable playing in San Diego so we aim to put in an effort we can be proud of. Regardless of the result, we know that we need to continue to improve.

Devereaux Ferris heads away with the US Eagles this week so we will have to learn to play without him for a few weeks. We have been looking at different options and will aim to settle on a replacement shortly.

We are really pleased with the result on Saturday, I think it’s been 9 years since Belmont last won on SFGG soil! I am very proud of the players resilience and composure in the last 10 mins where we scored a try to bring it back to 6pts and then put two 12 plus phases of attack together to sneak a try at the death!
We are upset with pieces of our game, set piece we need to be stronger from the start, we took too long to adjust to SFGG power. We have to work harder on our inside defense this weekend and will be a focus all week. We were too lazy on Saturday and almost cost us.
We are good on the injury front bar the usual bumps and bruises which are many after SFGG.
Olympic Club – Coach Ray Lehner
OMBAC remains a very dangerous team just like last year.  They can sting you in many ways, I was very impressed with their back row and their speed of play.  Turn overs and penalty transitions looks to be an area they exploit well.
As for my team, the Olympic Club, we will try and tackle a couple urgent “issues” each week at training in anticipation of the match ahead, this week maintaining our defensive structure against Belmont’s width and big ball carriers and in attack, finishing our own line breaks will be important.
#PassionRespectPride 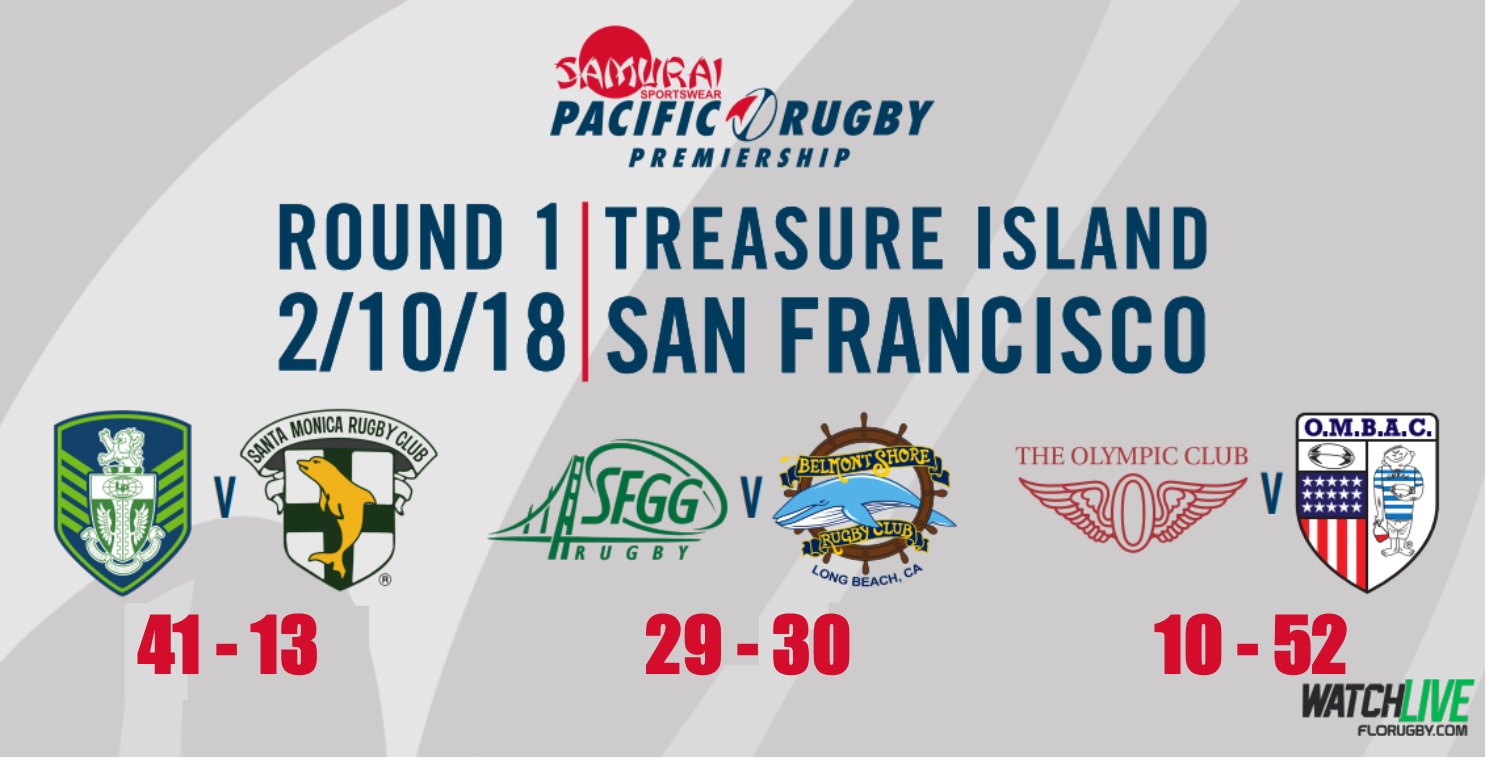