OMBAC have picked up a crucial win in their drive to make the final this season with a 22-18 win over the SFGG Rhinos. However, thanks to a bonus point earned by SFGG the Rhinos still hold a two point advantage over OMBAC for second place, albeit with a match in hand. The two teams will meet again in the penultimate weekend in what could decide who heads to Infinity Park.

OMBAC were first on the board when Zach Pangelinan made a heads up play to take the quick tap and dive over for the score. Soon OMBAC made it 12-0 thanks to some solid kicking game to earn field position. After pinning SFGG deep OMBAC used their maul to push James Daleo over the line for the score.

Credit to SFGG they stuck to their game and soon pegged three points back with a Tai Enosa penalty. They continued after it and using their dangerous backs soon found Opeti Okusi who broke through the defense for a try. With 25 minutes played SFGG were within four at 12-8.

Both teams would slug it out but a penalty from Ben Batger would increase OMBAC’s lead. They would then take it even further just before the halftime whistle. Taking a page out of the SFGG playbook they used their forwards to perfection releasing Ben Batger who passed to his brother Nick for the try. At the half OMBAC led 20-8.

In the second half SFGG were able to get on the board first but not for about 30 minutes into the stanza. Patrick Latu crashed over after hard work from the forwards and then Enosa would add another penalty with about seven minutes remaining. However, that was all SFGG would get as their comeback fell just short.

Next up OMBAC travel to Belmont Shore in another crucial match while SFGG have the weekend off. 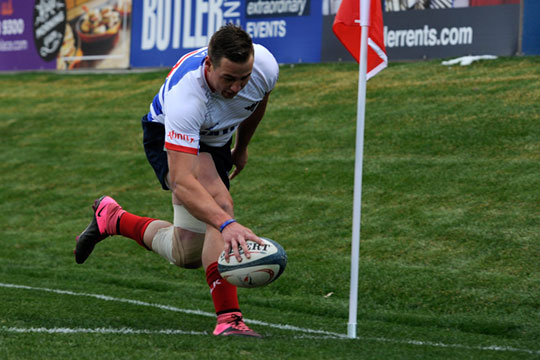