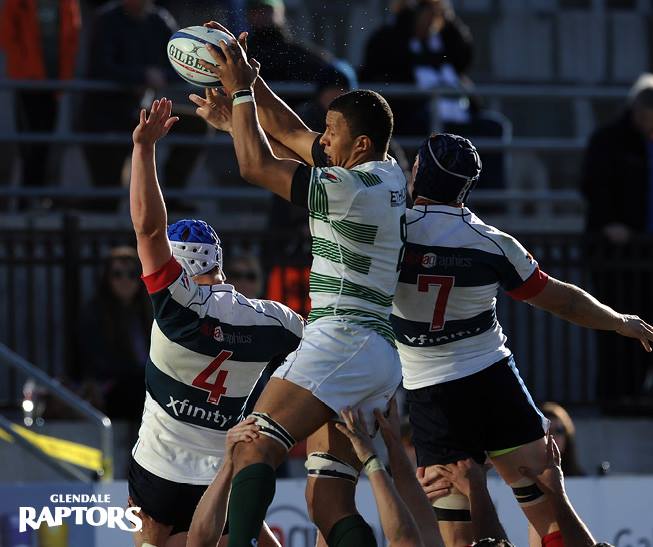 As you would expect with any rivalry match it was close, it was back and forth, and it came down to the final minutes. With playoff positioning on the line the Glendale Raptors needed a late penalty from Max Statler to hold off a furious comeback and defeat the Denver Barbarians 40-36. The Raptors now head into the final week of the season at the top of the league standings.

The Denver Barbarians have been a back and forth side all season winning one week and then falling the next. That pattern was no different this week despite a strong effort from stalwart Max De Achaval and better all around team play. It was De Achaval that would get things started with a penalty less than two minutes in. Glendale fly-half Daniel Fleming wasn’t to be outdone and matched that effort just five minutes later.

The first try of the match came just after the then minute mark when William Gillingham was the recipient of a pass from a quick tap off a Denver penalty. However, it didn’t take long for the Barbarians to respond. Off a line out at the five meter line the Barbarians took the ball and made a couple of quick pick and go’s before Conor Bertrand crossed over.

Still, a few minutes later Gillingham picked up his second try of the match when he picked off a pass and ran in. There was some controversy whether the Raptors were offside on the play but it pushed the lead to 17-8. But as the back and forth nature of the match continue it would be Logan Collins who once again scored off a five meter line out play. With De Achaval’s conversion the Raptors only led by two. That lead would increase to nine as Fleming would score to close out the half. They nearly had another try but it was ruled to have been knocked on.

Dustin Croy would open the second half with a well worked team try in the corner to balloon the lead to 31-15. But the Barbarians wouldn’t go away. A breakaway from speedster Kevon Williams put the Glendale defense in scrambles and even though he was caught he found the offload to Justin Pauga for the try.

Two penalties from Fleming would push the lead to 37-22 but when Brendan Shea scored in the 59th minute the Barbarians were within eight. Glendale had a shout for another try but the player was ruled to have been pushed into touch just short. They also nearly had Dewon Reed cross over before also being put into touch.

At the 70th minute mark the Barbarians put themselves within one after a phenomenal try from Kevon Williams. Taking the ball on the wing Williams showed his pace before stopping quickly to cause Brett Willis to miss allowing Williams to go in under the posts. The Barbarians kept pushing but when Stalter would hit a penalty in the 76th minute the Raptors had done enough for the win.